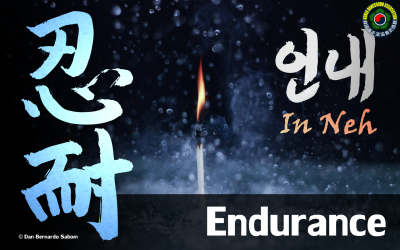 Anyone who has studied Tang Soo Do has heard this word.  If you read your gup manual you know that this word means Endurance.  But what exactly does endurance in the martial arts mean?

Interestingly, each of these Chinese characters mean endurance by themselves.  But together, it shows much more than just endurance, but perseverance.  The idea is that one can endure something, but still come out pretty beaten up and in a worse condition than they were before.  But to persevere means to come through the other side better.  This is the point of In Neh in Tang Soo Do.

The first Chinese character should be relatively familiar to some of you, it is the character that in Japanese is pronounced Shinobi, or if put with it's usual partner "者", it is pronounced Nin, as in Ninja.  This character is made up of two characters, 刃 which means Big Sword, and 心 which means Heart.  The concept behind this character is that someone is holding a sword to your heart, threatening to kill you if you don't give them something.  So it is important to endure this and come out alive.  (And don't tell any secrets).

The second Chinese character is also made up to two characters, 而 which means Beard and 寸 which means By Law.  This is an interesting character as it get's it's meaning from punsihment. Literally, by law, you are punished by being forced to have a beard and forbidden to shave.  Again, similar to 忍, the idea is to endure hardship and hopefully come out better in the end.

What's very important is that we don't confuse "In Neh" with "fitness level".  In Neh deals with much more than "how long you can run", or "how many punches you can do in one minute".  It does no one any good to cheapen ideals.  What is more important is that during training, things get hard, they get boring, they get monotonous, they get stressful, etc...  It is at these moments, the moment when you think to yourself, "I just can't get this form correct!" or "I'm not learning anything anymore!" or "I can't do this anymore, I keep getting beat."; these kinds of moments that Perseverance needs to kick in.

"Nothing worth doing is easy."

"Excuses are like armpits, everyone has them and they all stink."

That last one is my favorite by the way.